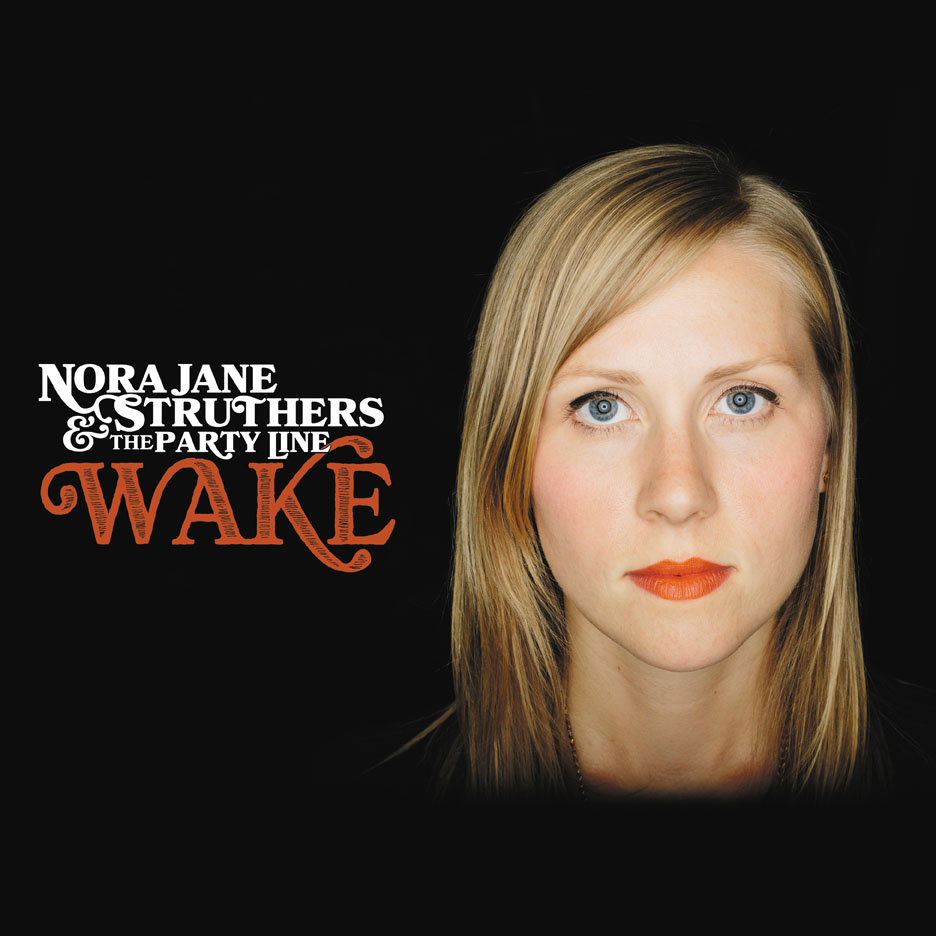 What People Are Saying About Wake…

“Nora Jane Struthers is guided by fire. …  Struthers has poured more and more emotion into her songwriting, coming up with some of the most quietly powerful narratives within the new wave of Americana artists.”

NPR’s Ken Tucker, Pop Music Critic for Fresh Air with Terry Gross, reviewed Wake on Fresh Air’s March 4, 2015 show, praising the album’s “rock ‘n’ roll force and forthrightness,” calling ‘Wake‘ an “awakening about who [Nora Jane] is, what she wants to do, and how she wants to sound” and saying she lives up to being named after Nora Charles and Jane Austen.

Among the highlights is an examination of “Let Go,” which Ken Tucker calls “an anthem of self-definition” and says is “about the roles women play throughout their lives to fulfill certain expectations [with] Struthers pushing back… you wouldn’t expect anything less from a rock ‘n’ roller.” In his post-broadcast Tweet, Fresh Air’s Ken Tucker called the album “excellent, alert, and sharp-tongued.”

“Nora Jane’s best [album] to date. . ..  Struthers’ third record is brimming and bursting with life, with lessons learned and love discovered.  With its immediately comforting blend of ’90s alt country, roadhouse blues, rootsy power pop, and straightforward honky-tonk, the album sounds, at various points, like early Neko Case, the Jayhawks, and, most strikingly, Kathleen Edwards. . ..  She’s crafted a carefully considered 11-song sequence that presents one of the most unabashedly celebratory suites of songs about being newly in love (“When I Wake,” “Mistake,” “Lovin’ You”) in recent memory, only to spend most of side-two in a state of hungover reckoning (“The Wire,” “Let Go.”), interrogating the easy, conclusive joy of fresh romance.

“Nora Jane is entirely and unequivocally herself, and wants to encourage you to do the same, “…spend time doing whatever it is that makes you feel like there are sparks bouncing around your sternum,’ she says.  In other words, pull a “Struthers”, follow your heart, and never look back.”

“Wake” [is] a collection of songs that adds more momentum to her profile as a rising star on the Americana scene.

(Reviewing “Let Go”) — “The song, a roots-y anthem of empowerment, explores the reasons behind the choices women make throughout their lives — standing up taller to fit in with the boys, listening to the “right” kinds of music, etc. — while ultimately recognizing it’s all bullshit and the real power comes from shrugging off those expectations. With any luck, this cut will kick the tired bro-country genre a step closer to its grave.”

(Reviewing “Wake”) — Struthers has undergone one of the more fascinating transformations in contemporary roots music.  [Struthers is a] fiercely intelligent, put-together, independent woman .. ..”

“With their Americana and bluegrass roots and several songs (dare I say) worthy of top 40 country airplay, my prediction is that this may be the breakout band of 2015.  If Nora Jane Struthers & the Party Line is coming to your town, I suggest you catch them, because the party has indeed started.”

“[Wake] brings to full fruition what her preceding record hinted at, a move from the acoustic-bluegrassy mix where she started to a more electric, diverse, aggressive brand of music. The change suits her well.”

(Stephen L. Betts, Reviewing “Let Go”) — “Just as her intensely energetic live performances connect audiences to the intricate tales woven through her lyrics, the ever-widening scope of Nora Jane Struthers’ musicality means that placing a neat, easy label on the genre she best represents is virtually impossible. … Whether the musical background is steeped in old-time folk or bluegrass, as much of her previous work have been, or, like Wake, boasts a more evolved blend of roots and rock with plenty of fiddle and steel guitar, Struthers’ lyrical vulnerability is matched by her growing confidence as a performer.”

“Wake, the upcoming new album from Nora Jane Struthers, is a confident collection of songs that shows the singer and songwriter putting a modern spin on traditional Americana sounds.”

“…the lyrical vulnerability comes straight from Struthers’ profound musical well, which has only gotten deeper in the two years since Carnival.”

“Falling in love is as good a reason as any other to let loose creatively, and it seems to have freed Struthers to put more of herself, and more of a wide-open heart’s feelings, into her latest collection of strong roots- and country-rock songs.“

END_OF_DOCUMENT_TOKEN_TO_BE_REPLACED 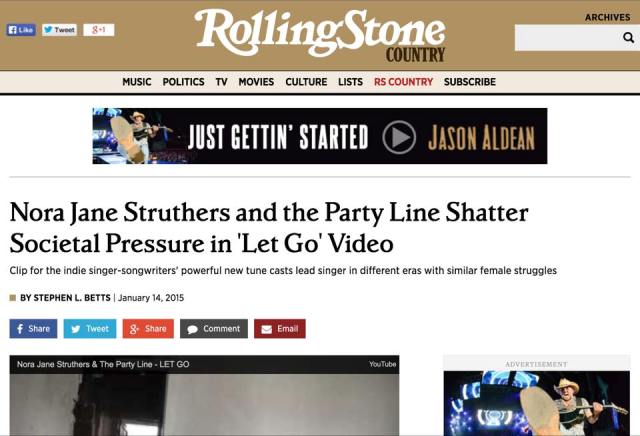 Here is what Rolling Stone Country had to say about “Let Go”:  “Just as her intensely energetic live performances connect audiences to the intricate tales woven through her lyrics, the ever-widening scope of Nora Jane Struthers’ musicality means that placing a neat, easy label on the genre she best represents is virtually impossible.” They also praise ‘Wake’ for its “evolved blend of roots and rock with plenty of fiddle and steel guitar, [where] Struthers’ lyrical vulnerability is matched by her growing confidence as a performer.”  Check out the video here:  http://goo.gl/nNDymm

END_OF_DOCUMENT_TOKEN_TO_BE_REPLACED 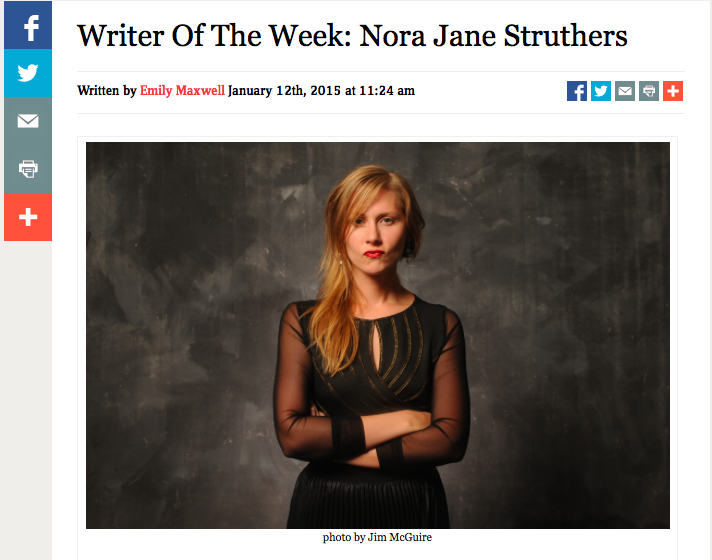 Nora Jane Struthers is writer of the week on American Songwriter!

Check out the interview Nora Jane did with American Songwriter here!

END_OF_DOCUMENT_TOKEN_TO_BE_REPLACED 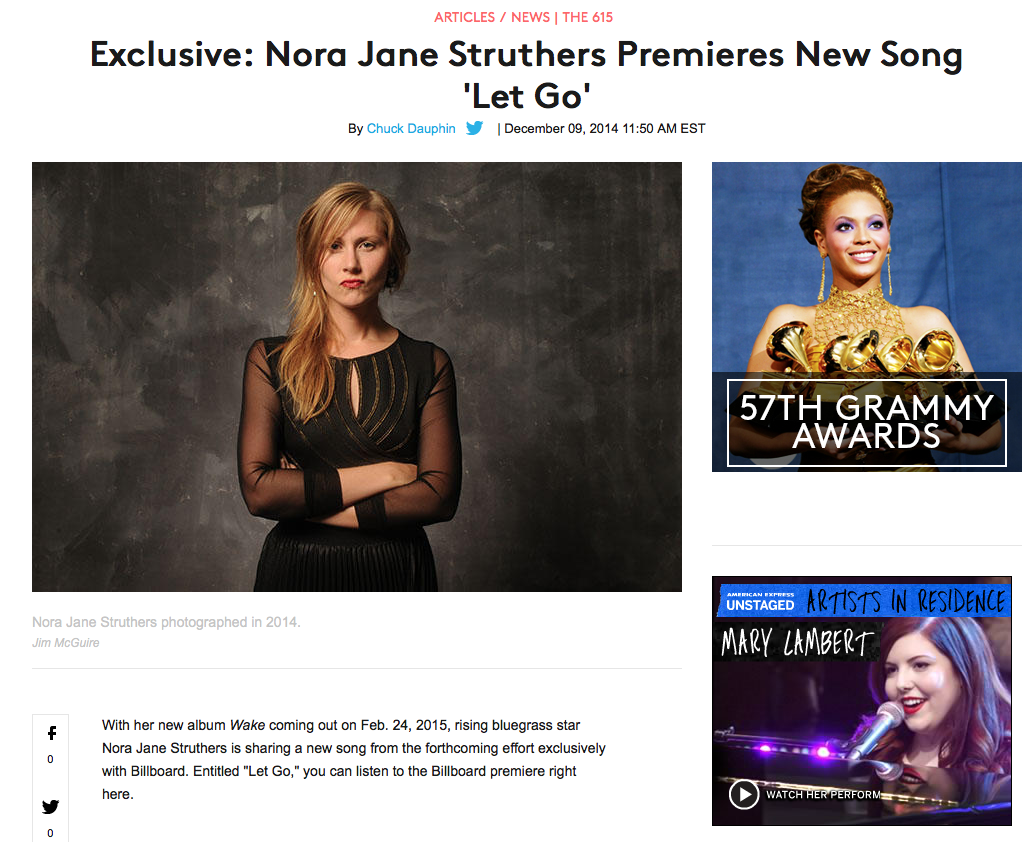 END_OF_DOCUMENT_TOKEN_TO_BE_REPLACED

NPR’s “The Record” Debuts “The Same Road” — “it should make anyone excited to hear the [new record].”

NPR’s Music’s Ann Powers has today debuted Nora Jane Struthers’ & The Party Line’s first song, “The Same Road” off their to-be-released new album, Wake.  Describing Nora Jane as creating “some of the most quietly powerful narratives within the new wave of Americana artists“, Powers calls Nora Jane “a serious woman with a light heart“, and says “the sound of the Party Line has progressed to include propulsive electric guitar and drums, and Struthers’ sweet voice is showing an edge, the better to meet the challenge.”  She says that “The Same Road,” “should make anyone excited to hear the whole thing.”

The song is also featured in Songs We Love carousel on the NPR Music homepage. 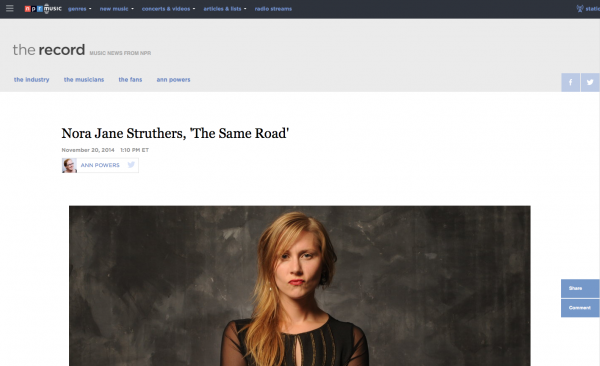 Wake releases to the public on February 24, 2014.  However, you can listen to “The Same Road” now, and also get early access to “Wake” by supporting Nora Jane’s Kickstarter campaign today!  By just pre-purchasing the record, you’ll get a digital download of the record before it is released to the public!