I love to Dance 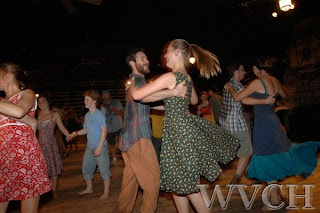 ~~Above is a photo snapped at this year’s Appalachian String Band Festival (Clifftop, WV)~~

Dear Friends,
It’s true–I love to dance. As a tot I took tap lessons but that is the extent of my formal training. I first discovered what I was missing out on when I ventured down south to the Galax Fiddler’s Convention in Galax, VA and discovered flatfoot dancing. Like the music, people dance to participate and be an active part of a community. What a wonderful way to live!
Living in New York I was introduces, by a Virginian friend of mine, to the New York City Barn Dance, held every third Thursday at the Hungarian House on the upper East Side. It was there that I fell in love with dancing as a community activity. If you live in New York– go check it out sometime; you;ll not regret it.
Since moving to Nashville, Monday nights often find me down on Broadway dancing in Robert’s to John England’s great western swing band or to country classics rendered expertly by Monty Good and the Honky Tonk Hero’s.
Come on down and join me if you’re ever in town.
Thanks for reading friends.
Sincerely,
Nora Jane